Removing ice dams has changed quite a bit over the years.  The media used to suggest hiring a contractor, to pull the gutters off your home so the ice dams process would be solved.  This idea was well intended but wrong.

Contractors that were fixing ice dams this way caused severe damage to roof and gutter systems. The gutters were bent, and torn as they fell to the ground full of ice and snow.  Then when the snow melted it dropped next to the homes foundation and caused basement flooding. Damages to bushes and landscapes from removing ice dams was also an issue.

Before ice dams even start, if possible remove heavy snow and ice from the edges of your roof before it can turn into an ice dam.  I suggest hiring a contractor to do this, working on roofs and ladders covered with snow is VERY dangerous, and cause major damage to the roof if you don’t know what you are doing. 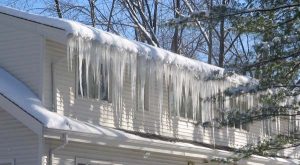 are a wall of ice that forms at the edge of the roof, usually at the gutters or soffit.  The water then backs up behind the ice dam and creates a pool of water.  This pool of water can leak into a home and cause damage to walls, ceilings, insulation, and other areas.

Ice dams are usually caused by improper ventilation in the attic.  This causes warmer areas in your attic then the snow begins to melt, even when the outside temperature is well below freezing. When the accumulated snow on your roof starts melting it runs down your roof underneath the snow until it reaches a “colder” section and it begins to freeze again creating an ice dam.  These colder areas are usually above the soffits or in valleys and gutters.

How can I prevent removing ice dams?

Properly ventilating and insulating the attic is usually the best way to prevent ice dams.  The usual recommendation for venting is 1 square foot of vent for every 150 feet of attic floor area but very few houses are vented properly. If you have small louvered windows at either end of the attic, known as gable vents, you can either replace them with larger vents or install an electric vent fan over them. These fans will pull outside air into the attic and keep the temperature inside cooler.

Properly removing ice dams can be quite dangerous if you don’t know how.  You are also risking personal injury or death, and major damages to the roof.  Always contact a professional with roofing experience for removing ice dams.

Immediate action: Removing the ice dams and snow from the roof, this stops the present problem and prevents another ice dam from forming from any snow that is left on the roof.  Use a roof rake and push broom to remove the snow and the ice dam and be careful, even experienced ice companies can damage a roof when removing ice dams.  Imagine the amount of damage someone with little or no experience can cause when removing ice dams!